Contents of this page

These pages on Mathematics are for those who don't like Mathematics or who hated maths at school as well as for teachers and those at school (or who left school a long while ago!) who want to see a fun side of maths and who like to play with numbers. The level of mathematics required is what would be taught up to GCSE (age 15) in UK schools and rarely does it need A-level skills (age 17, pre university). Other pages are designed to help with A-level Maths topics, either as a teacher or student.
The Calculators on all pages here use only standard JavaScript, which is built-in to every browser. They should therefore work on all browsers on all devices, mobile, tablet or PC.

Fibonacci Numbers a collection of information on Fibonacci numbers (0,1,1,2,3,5,8,13,21,...) and the Golden section ( 0.61803... and 1.61803...)
This Fibonacci page was originally developed in 1995 and went live on the web in March 1996 making it now one of the longest running active pages on Mathematics on the web!
At the top it includes links to the pages shown here below. The whole site is hosted by the University of Surrey. This page alone still gets more than 3000-5000 visits per day.
A simple way to reference this page is to use the automatic-redirection page www.tinyurl.com/fibandphi.

Ron Knott was on Melvyn Bragg's In Our Time programme on BBC Radio 4, November 29, 2007 when we discussed The Fibonacci Numbers (45 minutes). You can


Dr E Lawrence and myself, members of Surrey University Mathematics Department, were part of a large UK government Teaching and Learning Technology Project (TLTP) called Mathwise, although now that name has been used by several other individuals and groups unassociated with this project.
It aimed to provide maths software to link school and university mathematics, involving 23 UK universities developing activities and assessment on 40 topics in mathematics, ending in about 1995.
Mathwise never really reached its full potential because it was developed on both PCs and Macs using a variety of software. The PC and Mac software was never integrated into one unified and accessible system.
I developed this Fibonacci page after Mathwise was ending, in 1995, to see if the (then new) internet could be used to communicate maths effectively and generally, having the advantages that It was designed as both a resource for teachers as well as for keen and not-so-keen school and beginning-university students who wanted to explore topics off the main curriculum. Hence each webpage is longer than is now become the norm on the web so that each could be downloaded and viewed at leisure offline, dating from the days when a broadband connection was still rare, costly and very slow.
The pages gained many awards in its early days and have been extensively expanded and augmented regularly since then.

Whole numbers and how to represent them
Number bases: what happens if instead of using 10 as the basis of writing numbers we used base 2 (binary) or base −10? What if we didn't use power of a number but used the Fibonacci numbers or the Factorials?
What about base Phi - the golden section number? or even a complex number?

Pages on different kinds of Fractions:

Fractions Calculator
An accurate calculator to convert ordinary fractions (such as 2/7) to and from decimal fractions (such as 0.285714...). to any number of decimal places accuracy. The web page does not need any extra software, just your browser on any device.
Farey Fractions and trees
There are some lovely patterns of we take all the fractions made with the numerators and denominators 1 to n and put them in order of size (Farey sequences). It leads us to a tree structure (the Stern-Brocot Tree) and answers some wuestions about tightly packing circles on a flat surface.
Egyptian Fractions
explains how the Egyptians and Babylonians of 3000 BC represented fractions and how they used them. In some ways, their method is better than the decimal system! There are now some online calculators on this page to take some of the work out of generating these fractions.
An Introduction to Continued Fractions
links their use in explaining the patterns on seedheads and flowers and their usefulness in mathematics too.
There is an online Continued Fraction Calculator so you can experiment for yourself. No download is needed -- all you need is on the web page and in your browser (any browser)!

Pythagorean Triangles
those integer-sided, right-angled triangles such as the triangle with sides of 3, 4 and 5. Includes a formula for generating them all and calculator which shows you how. These triangles were extensively studied by the Babylonians of 5000 years ago and some of the oldest mathematical writings (clay tablets) contain tables of such triangles.
The page includes several online interactive Calculators so you can experiment for yourself.
Angles with simple trig values
cos(60°)=0.5, sin(60°)=√3/2, tan(45°)=1. What other angles have simple expressions for their trig values?
cos(π/5) = Phi/2 where Phi is the golden section number (1+√5)/2 and lots of other facts and ways to remember the trig formulas.
A Triangle converter: Cartesian, Trilinear and Barycentric coordinates
Other ways of representing point with respect to a given triangle. Also a way to identify a given triangle point using the Encyclopedia of Triangle Centers (ETC).

Runsums
are sums of consecutive numbers, e.g. 4+5 is a runsum for 9, as is 2+3+4. An on-line calculator computes all the runsums for a given number and finds numbers with a specific number of runsums (e.g. under "2" would be 9 because 9 has just 2 runsums shown above). Runsums are the difference between two Triangle Numbers, and this is also explained on the web page.
Figurate or Polygonal Numbers
We all know about square numbers and cubes but what about other shapes such as triangular, pentagonal (5 sided) or tetrahedrons (a triangle-based pyramid) and square-based or other pyramids?
More on Polygonal Numbers Matchstick numbers, central polygonal numbers and some 3D and higher dimensional shapes.
What's special about the number 2016?
A page on the amazing and fun maths facts, factoids and pictures on the number 2016, given at a talk with IMA NW Branch and MathsJam in Manchester in January 2016.

GCSE Interactive Test
that generates variations on 50 questions, marks, detects common errors, and shows the correct answer and provides bar charts of your results. It was originally developed for the Mathematics Enhancement Programme at Exeter University as a resource for Mathematics teachers.
A-level Mathematics Interactive Tests
One page on each of about 120 topics for Mathematics A and AS Level originally developed for MEI.
An interactive Randomiser
that can produce random cards, coins, dice, integers and items for games or statistical experiments.

Got It!
If you like the TV programme Countdown, you'll love Got It!. Select some number cards and it will generate a target number for you to make using the cards and +, -, × and ÷ in 30 seconds. You can select the level of difficulty from primary school level to Maths MasterMind. IF you get stuck or run out of time, Got It will show you one way to get the target.
Lock and Roll!
a Yahtzee-type solitaire game where you roll dice to score in various categories.
Herchel's Perpetual Calendar
which can not only find the day of the week for a given day, month and year, but also tell you the years when your birthday falls on a Saturday, or which months in a year have a "Friday 13th". It uses a simple table with no need for a calculator!
Math Jokes
"Where do you go to get a degree in Apologies?" at the University of Sorry (Surrey) (groan). Here's a collection of similar "courses". 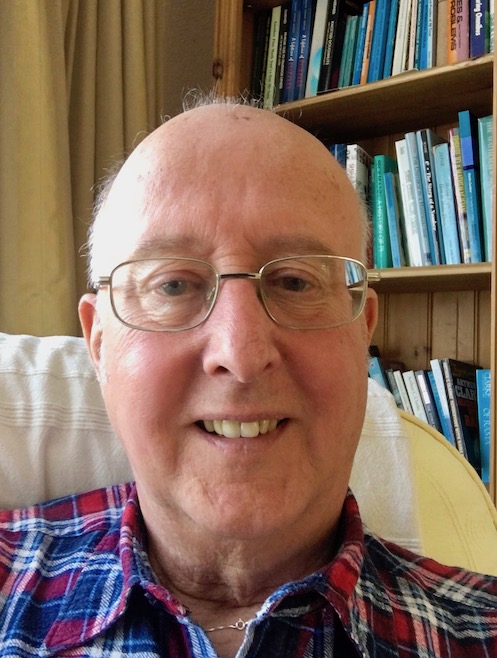 I was a lecturer in the Departments of Mathematics and Computing Science at the University of Surrey, Guildford, UK, for 19 years until September 1998 when I left to start working for myself making web pages for maths education sites.
I now give mathematics talks to students at schools and universities as well as to general audiences, teachers' conferences and Science Festivals on topics of the web pages above:
especially the Fibonacci Numbers and why they occur so often in plants, Fun with Fractions, As Easy As Pi, ... .

I now live in Bolton, near Manchester in NW England.

2019 24 July, 14 September, 13 October University of Surrey Open Days
I will be hosting the "You do the Maths..." informal sessions throughout the day
in the Mathematics Department (top floor, AA Building)
Come and say Hi, try some hands-on maths and meet current students and staff.

See this map of the campus
and other info you need is here.

A Triangle Convertor for Cartesian, Trilinear and Barycentric Coordinates

This page is designed to link into Clark Kimberling's excellent site:
Encyclopedia of Triangle Centers (ETC)

It provides an automatic lookup of a centre using Peter Moses lists for the 6-9-13 triangle
and is self-contained with an introduction for those new to trilinear and barycentric coordinates.

2018 22, 23 June
2018 15 September The University of Surrey Open Days
"Is everything in Maths Always TRUE or FALSE? or When maths goes wrong!" about puzzles and paradoxes in Logic suitable for a general audience but of particular relevance to students applying to Maths Degree courses
2018 26 January
The Annual joint meeting of the Institute of Mathematics and its Applications NW Branch and MathJam was held at the University in Manchester. I gave a presentation on new results on Number Palindromes
2017 The University of Surrey Open Days in 2017
will again host Dr Ron Knott's popular Mini-Maths talks on:
Friday 30 June,
Saturday 1 July,
Saturday 16 September,
Saturday 14 October
These are free 15-20 minute "fun" talks on maths suitable for a general audience and held in the Mathematics Department on top floor of the AA building: see this PDF map of the campus.
On each day Ron will be giving three different presentations at 11:45, 12:30 and 14:15.
For more details of how to get to the University of Surrey in Guildford, here is some travel information for train, coach and car. Everyone welcome!
2017 6 November
Proceedings of the 2016 International Fibonacci Conference at Caen, France.
The 2016 Conference Proceedings

Dr Ron Knott
Please contact me by email at

if you want to enquire about a talk at your school or society or Science Festival suitable for a general audience or for mathematics students.